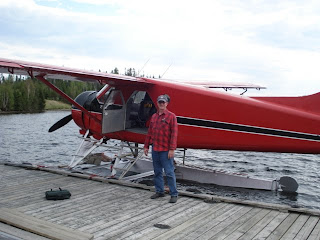 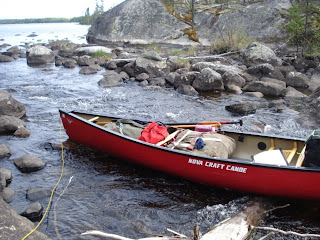 Also, if this had been a tandem canoe trip it would have been more difficult especially on the upper Kopka because of the low water levels. The low levels made for a real technical challenge in negotiating the upper reaches which is really small-creek size and not a river. Having a shorter, more maneuverable solo canoe really helped getting down some of the rocky twisty little sections of this river.

Alternatively another 10" or so of water ,especially in the upper Kopka would have made tandem canoeing a real fun blast--some of those rocks would have been washed out and the channel more straightforward. More water could possibly allow for a "glass" boat if you were careful ( and skilled).

If a reader has any questions regarding this route email me at the canoe forum (< myccr canoe routes) and I'll try to answer .

THE TRIP
After a 3-day 1,600 mile drive from New Jersey USA, I arrived at my outfitter's base, Mattice Lake Outfitters, owned and operated by Don and Annette Elliot. The camp is 5 miles south of Armstrong Station, Ontario and you'll find good accommodation if you rent their cabin for the night which sleeps up to 6 and has a nice kitchen and hot shower with decent water pressure...cost about $100, which is what you'll pay for a cheesy room at some motel on Hwy 17. I had dinner in Armstrong which is a small railroad town and doesn't have much to see or talk about. There are two restaurants--take your pick--and they offer food that you might expect at the end of a 150 mile empty road, which is where Armstrong is located. Folks are friendly enough though.

If you're staying at Don's cabin you should bring you own bedding (sleeping bag/pillow) and it wouldn't be a bad idea to bring your supper in a cooler to cook in the kitchen, which has a great stove and fridge. You can watch the float planes land and take off from the front porch.

DAY 1, May 20th, 2010
I was up early and ready 8 AM since I was the first plane trip out. Kelly the pilot lashed the boat to the strut of the De Haviland Beaver after my gear had been loaded. estination was Kershaw Lake, part of the Kashishibog River system. Someone from Mattice Outfitter was going to park my truck at Bukemiga Lake for the takeout. My plan is to paddle down the Kashishibog, and portage in to the Kopka system at Redsand Lake. This is sometimes done from the opposite direction from the Graham Road, paddling up the Kashishibog via Sparkling Lake and then portaging into Redsand. It's one LONG car shuttle for that. An alternative fly-in could be Sparkling Lake. This would involve some brief upstream lining but the Kashishibog is more a small creek and easy to get up. The added benefit of this route is there may be some better campsites available where the Kashish narrows after Sparkling Lake than on the route I travelled.

A good part of this area was devastated by a forest fire about 15 years ago and the landscape shows it. Kelly the pilot landed me on Kershaw Lake and departed. There is an abandoned cabin on Kershaw Lake that has a decrepid dock that he motored right up to. Kershaw is an easy paddle to the disharge of the Kashishbog at the western end. It narrows down considerably here and there are some rocky shallows to navigate before the actual stream that takes you to Savage Lake. The stream is completely clogged with dead trees, but there is a real easy 50 yd portage on the right. Maps may show a road at the western narrows of Kershaw Lake , a continuation of 811 actually. But forget about using it as an access--it is overgrown and unusable, no bridge or sign of one now.

Savage Lake is a small , pretty lake and you'll be across it in no time. At the outlet I saw a bald eagle and it looked like they liked to hang out there as the stones were littered with eagle poop.
The outlet (Kashishibog "River") was just a small stream and shallow enough I had to line it down a short 20 ft. A little more water and it could be paddled. There were no more portages or lining required until I reached the portage into Redsand Lake.

In two miles entering the main part of Kashishibog Lake it's important to maintain your bearings as the many islands make orientation difficult. keep your topo map handy and consult regularly. Best to get to the western shore soon, going between the islands (I chose the shallow channel between the northerly two big ones) and then down about 1 mile to the lake narrows and another section of the Lake Kashishibog begins. Where the lake narrows there's a good camp/lunchsite on the left. After the lake widens out again you'll see a cabin on the west end of an island, then it's about 3 miles to the portage to Redsand Lake. Nothing too difficultso far. There are no pre-used campsites until the portage but you can rig up something on the numerous bare rocks almost anywhere. The portage is easy to locate in a small bay . Being civic-minded I wrapped some pink construction tape around a tree to make it even easier to spot. . . at least for a while.

There was a campsite listed in my notes at the end of this portage but it was so buggy and poor I decided to bushwack a camp about 1/3 of the way along the portage and finish the trail the next day. Since this is not a difficult portage (500 yd but only rises about 20 ft total and only minor mucky area), I think it would be better to have found a nicer campsite on the rocks before arriving, albeit still bushwacked, and enjoyed better scenery and fewer bugs. As it was I needed the DEET and bug hat to maintain sanity. For the rest of the trip the bugs were not as bad as here, though.
Posted by serge88 at 11:25 AM